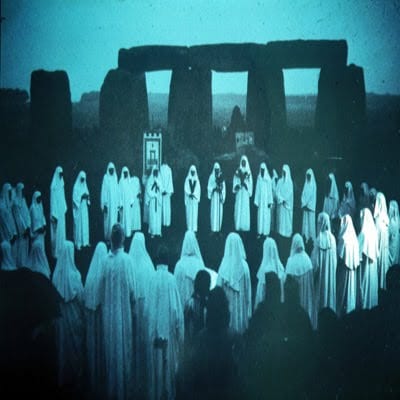 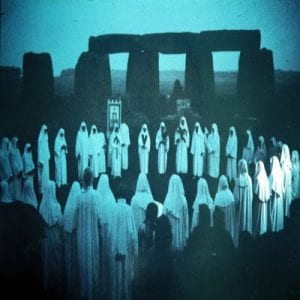 The word druid derives from the Indo-European root drui, meaning “oak,” as well as “solid and true.” Originally, druids served as the bards, teachers, healers, judges, scribes, seers, astrologers, and spiritual leaders of the ancient Celts. They conducted rites and rituals, divined the future, healed the sick, kept the history of their people, and addressed legal matters within their communities. These wise men and women were highly revered and wielded authority second only to the king’s.

Much of what’s known today about the early druids has been handed down through oral tradition, folklore, legends, songs, and poetry. As the Romans and Christianity moved into Ireland and Britain, the conquerors destroyed the druids and their tradition. Thus, most of druidic history remains shrouded in mystery.

Maya MaGee Sutton, Ph.D., and Nicholas R. Mann, authors of Druid Magic, explain that in contemporary Irish dictionaries, the word draiocht means “magic” as well as “spells.” Its root, draoi, translates as “magician,” “sorcerer,” or “druid.” This suggests a strong connection between the druids and the practice of magic.

Modern-day druids follow some of the beliefs and practices of their early ancestors. With little actual information available about the old ways, however, neo-druids interpret the spiritual tradition by blending ancient with contemporary wisdom. A reverence for nature, knowledge of astrology and divination, healing, and shamanic journeying continue to be part of today’s druidic practice.

The druids consider trees to be sacred. Oaks, in particular, have long been linked with druid spirituality. Sacred rituals were — and still are — performed in oak groves. Trees are believed to embody wisdom that can be passed along to human beings. The Celtic World Tree, which connects the Upper, Middle, and Lower Worlds, or realms of existence, is a symbolic composite of all species of trees and incorporates all their qualities.

Each tree possesses certain characteristics and unique properties that druid magicians use. Rowan trees, for instance, offer protection. Oaks confer strength and endurance. Holly, with its spiked leaves that can withstand even the harshest winters, symbolizes courage. Willows are associated with divination and intuition. Poplars represent death and rebirth.

Trees play an integral role in the druids’ magical practice, and they can help you as well. The early Celts often burned the wood of sacred trees in ritual fires, a practice that continues today, especially at Beltane and Yule. Here are a few other suggestions:

Each of the twenty letters in the ancient Celtic tree alphabet Ogham (pronounced oh-am) corresponds to a tree. B, or Beth, for instance, is linked with the birch; N, or Nion represents the ash. The letters look like a series of straight and angled lines, or notches, cut along a central line or stave.

Ogham Script
A word or phrase written in Ogham looks a bit like a tree limb with branches sprouting from it. Throughout Ireland and Britain you can see standing stones engraved with Ogham glyphs. Early Celtic manuscripts also feature Ogham script.

Another unique characteristic of Ogham is that it can be signed with the fingers. Using a part of the body — the torso, nose, or leg — as a center dividing line, you can extend your fingers on either side to form letters.

Because the Celts and Druids considered trees to be sacred, the Ogham letters also serve as mystical symbols. Like the Norse runes, discussed in Chapter 4, Ogham glyphs can be inscribed on pieces of wood or stone and used as an oracle. You can also draw a single letter or write a phrase in Ogham and add it to a magic charm. For example, the letter L, which corresponds to the rowan tree, could be included in a protection amulet.