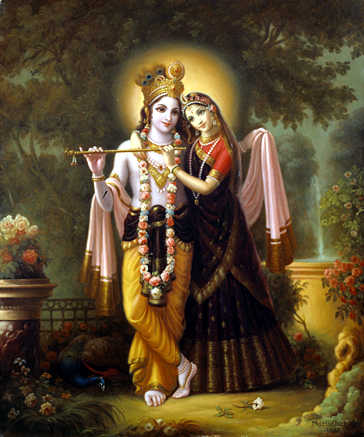 Hare Krishna, also called the International Society for Krishna Consciousness (ISKCON), was founded in the United States in 1966, making it one of the world’s youngest religions. Krishna was the eighth
and principal avatar of Vishnu in the Hindu religion, and this religious sect has strong Hindu affiliations. The movement first appealed to counterculture youths, many of whom were runaways.

The Krishnas became a common sight on the streets of major cities, usually dressed in bright saffron-colored Hindu clothes with shaven heads, smiles on their faces, a copy of the Bhagavad Gita in hand, and a proselytizing spirit in their voice. They were often chanting and playing Indian finger cymbals. The chants are called a mantra, which is a repeated vibration of sound that many believe cleanses the mind. Their main activity was soliciting contributions from passersby, something many people called begging. They were frequently prohibited from public areas, particularly airports.

The words of Krishna in the ninth chapter of the Gita offer highest praise for Bhakti Yoga as a means to the highest spiritual attainments. Krishna says, “Fill they mind with Me, be My devotee, sacrifice unto Me, bow down to Me; thus having made thy heart steadfast in Me, taking Me as the Supreme Goal, thou shalt come to Me.” (9.34)
People are thought of as souls composed of Krishna’s highest energy. To achieve peace and happiness, adherents are urged to seek Krishna. Krishna consciousness is not imposed on the mind; rather, it is already inside waiting to emerge. Followers are advised that chanting “Hare Krishna” is a way of seeking Krishna directly.

Chanting in order to draw closer to God is an idea dating to the fifth century B.C.E. and the publication of the Bhagavad-Gita or Gita for short. Chanting or singing the names of the Lord is known as bhakti, meaning “devotion” or “participation.” Swami Vivekananda described Bhakti Yoga as, “the path of systematized devotion for the attainment of union with the absolute.”

On the streets, the Hare Krisha devotees could be found chanting:

“Hare” means “praise,” so the devotees got the name Hare Krishnas because of their praise of this avatar.

This chanting is but one component of the Bhakti approach to God. The leader Srila Prabhupada also expected his Hare Krishna devotees to lead ascetic lives, not eat meat, and eschew alcohol and drugs. They were also to remain celibate, save for the procreation of children within marriage.

The official seven-point goal of the Hare Krishna consciousness movement was given by Srila Prabhupada at the time of ISKCON’s incorporation in July, 1966 in New York City. The goals are:

According to Lord Sri Caitanya Mahaprabhu, that God consciousness does not depend on caste or church membership. He was opposed to any social, religious, or racist prejudice. The purpose of chanting the name Krishna was a method to enable anyone to become Krishna conscious.

Srila Prabhupada, founder of the Hare Krishna movement, was born in Calcutta in 1896 and died in 1977. In 1922, he met his spiritual master, Srila Bhaktisddhanta Sarasvati Thakur, and became his initiated disciple. Meanwhile, he formed a successful pharmaceutical business to maintain his family.

In 1950, he left his home and family and dedicated the rest of his life to teaching. In 1959, he renounced material life and wrote three volumes of the Srimad-Bhagavatam in English. He became convinced that the United States would be the best marketplace for his preaching, so he moved there. Eventually, he rented a small storefront at 26 2nd Avenue in New York City. Devotees began to gather, which led to the incorporation of the movement. He held chanting sessions and gave lectures. He distributed prasadam (food that has been offered to the Supreme Lord; devotees eat only what has been offered first to the Lord, because to do otherwise would be to ingest sin), and he started the first Sunday feasts.

Adherents of ISKCON are vegetarians and serve vegetarian meals in their restaurants, temples, and through the Food for Life programs for the homeless, hungry, or disadvantaged. The society has sold over 10 million copies of its vegetarian cookbooks.

Once the New York devotees became established, Srila Prabhupada moved to San Francisco, where the hippies flocked to join the movement. They were attracted by the philosophy of spreading spiritual love and peace. Some of the devotees became disciples and were sent to preach the message in other parts of the world and to establish Krishna Conscious centers. They went first to London, and then spread out to Berlin and India.

Prabhupada died in 1977. By then he had built a foundation and aided the expansion of a religion that encompassed well over 100 centers throughout the world and was said to have written more than fifty volumes of transcendental literature. He established a publishing house (The Bhaktivedanta Book Trust), which has become the world’s largest publisher of Vedic literature. He also built a scientific preaching academy (The Bhaktivedanta Institute).

Reincarnation is a pillar of the faith. Hare Krishnas believe that our current lives are not the only ones we will live and that our soul or self has no beginning and no end; this essence within travels from one incarnation to the next. They propose that during life we move from childhood to middle age to old age, but only the body changes, not the inner self or the soul.

Death is only a transition; we continue the cycle with birth in another body. How we behave in one life will affect what we become in the next.

Do Hare Krishnas have churches?
Not as such — they have temples that are essentially communes. Unmarried men and women live separately; married couples have other quarters. Members support the temples by soliciting funds and selling publications. Spiritual masters initiate new members and oversee the spiritual life of the temples. Members of the temples dress in Hindu clothes.

The official statement of the faith proposes a society that moves toward a more natural economy with smaller, self-sufficient economic units based on simple living and high thinking. They envisage an environment that reduces the urge to excessive exploitation, thus leading to the nonmaterial happiness of the soul. They feel that without raising desires from the materialistic to the spiritual, the basic impetus toward environmental destruction will remain.

The original Bhagavad-Gita forms the basis of Hare Krishna’s required study; however, Srila Prabhupada produced his own translations and editing of the work. He wrote and published fifty volumes of transcendental literature. His major books include Bhagavad-Gita as It Is and Srimad Bhagavatam. Adherents are encouraged to read Srila Prabhupada’s selected literature daily.