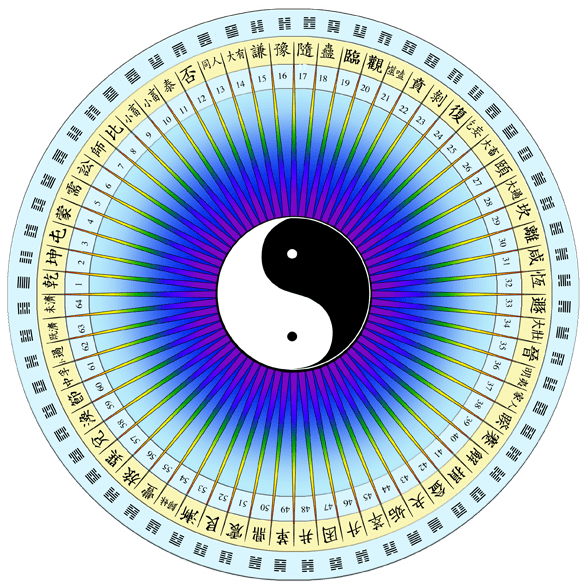 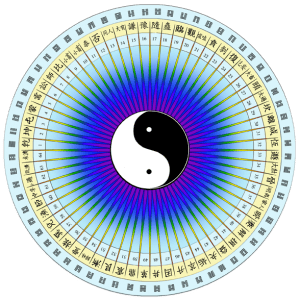 Believed to have been created in China by Confucius about a thousand years before the birth of Christ, the I Ching, or Book of Changes, consists of sixty-four hexagrams (patterns made up of six lines), each with a different meaning. Three millennia later, Richard Wilhelm and Cary F. Baynes collaborated on a translation that introduced Westerners to this ancient oracle. The Wilhelm-Baynes edition (published in 1950 by the Princeton University Press) is still considered the standard for I Ching enthusiasts. It has sold more than a million copies since its initial publication.

According to some researchers, the I Ching evolved from an even older Chinese divination method. This technique, which dates back 5,000 years to the time of the Emperor Fu Hsi, is based on interpreting cracks in the shells of tortoises.

Traditionally, seekers used yarrow sticks to determine which hexagrams answered their questions. Today, most people toss three coins six times to form a meaningful pattern. Each toss corresponds to a line in the hexagram. When more heads than tails turn up, it signifies a solid or yang line. When more tails than heads appear, the result is a broken or yin line. When you get three heads or three tails in a toss, you have what’s called a changing line. Changing lines are particularly meaningful and show the development of the matter at hand.

I Ching hexagrams are formed from the bottom up. Your first coin toss corresponds to the bottom line of the pattern, and the top line represents your sixth coin toss. Once you’ve drawn your hexagram, look it up in the I Ching to learn what it means with regard to your question or concern.

Some of the new I Ching kits use cards, marbles, or other methods to produce an answer. A boxed set of six red-and-black plastic sticks, made by a Dutch company called Blozo Products and distributed in the United States by Music Design, is a convenient and accurate tool for I Ching readings. You can even do readings online.

“The hexagrams reflect the path we follow and where it leads. If our attitudes are out of harmony with the great harmony of the cosmos, they reflect this. If we are in harmony, the counsel given will help us keep our inner balance. If forthcoming events may threaten our inner equilibrium, the hexagrams give us warning.” — Carol K. Anthony, A Guide to the I Ching

Because the I Ching is linked with ancient Chinese laws and customs, some Westerners feel it’s too rigid and patriarchal. Scores of modern writers have updated the original text to make it less hierarchical and more accessible to today’s users.

The i-ching does not give you specific answers to your questions but rather reveals patterns which helps you arrive at the answer you seek. Answers are given in 64 hexagrams of solid lines (yang) and broken lines (yin). These represent a state of being.

The most common method used to determine hexagrams is to toss three coins three times. The traditional method is to toss a set of 50 yarrow sticks.

The iching dates back to around 2852 B.C. The chinese emperor Fu-hsi developed a set of trigrams.

Later on around 1143 B.C. the trigrams were doubled to hexagrams. The iching found its way to western culture in the 19th century.

In Western cultures, the IChing is mostly used as a way of divination. But in ancient China, the Iching represented wisdom and philosophy. The IChing is in fact the oldest of Chinese classic texts. It talks about an ancient system of philosophy and cosmology at the center of Chinese beliefs. Traditionally it was believed that IChing had originated originated with the mythical Fu Hsi, one of the earliest legendary rulers of China. In Iching, “ching” means book and “I” means change, so the name basically translates as “The Book of Changes”. The Iching has also been studied by a large number of philosophers including Confucius.

Among the many forms of divination is a method using the I Ching or Book of Changes. The book is structured as an 8×8 matrix of sixty-four hexagrams representing the states and the dynamic relationships of the eight elements, each represented by a trigram. Throughout China’s region of cultural influence (including Korea, Japan and Vietnam), scholars have added comments and interpretation to this work, one of the most important in ancient Chinese culture; it has also attracted the interest of many thinkers in the West.

The process of consulting the book as an oracle involves determining the hexagram by a method of random generation and then reading the text associated with that hexagram, and is a form of bibliomancy.

Each line of a hexagram determined with these methods is either stable (“young”) or changing (“old”); thus, there are four possibilities for each line, corresponding to the cycle of change from yin to yang and back again:

Taoist philosophy holds that powerful yin will eventually turn to yang (and vice versa), so a new hexagram is formed by transposing each changing yin line with a yang line, and vice versa. Thus, further insight into the process of change is gained by reading the text of this new hexagram and studying it as the result of the current change.

Cracks on turtle shell in IChing Divination:
The turtle shell oracle is probably the earliest record of fortune telling. The diviner would apply heat to a piece of a turtle shell (sometimes with a hot poker), and interpret the resulting cracks. The cracks were sometimes annotated with inscriptions, the oldest Chinese writings that have been discovered. This oracle predated the earliest versions of the Zhou Yi (dated from about 1100 BC) by hundreds of years. A variant on this method was to use ox shoulder bones. When thick material was to be cracked, the underside was thinned by carving with a knife.

Yarrow stalks of IChing Divination:
Here’s the instructions for using the yarrow stalks from the ten wings of the I Ching, and also some other instructions can be found here, and calculation of the probabilities here.

One takes fifty yarrow stalks, of which only forty-nine are used. These forty-nine are first divided into two heaps (at random), then a stalk from the right-hand heap is inserted between the ring finger and the little finger of the left hand. The left heap is counted through by fours, and the remainder (four or less) is inserted between the ring finger and the middle finger. The same thing is done with the right heap, and the remainder inserted between the forefinger and the middle finger. This constitutes one change. Now one is holding in one’s hand either five or nine stalks in all. The two remaining heaps are put together, and the same process is repeated twice. These second and third times, one obtains either four or eight stalks. The five stalks of the first counting and the four of each of the succeeding countings are regarded as a unit having the numerical value three; the nine stalks of the first counting and the eight of the succeeding countings have the numerical value two. When three successive changes produce the sum 3+3+3=9, this makes the old yang, i.e., a firm line that moves. The sum 2+2+2=6 makes old yin, a yielding line that moves. Seven is the young yang, and eight the young yin; they are not taken into account as individual lines. The correct probability has been used also in the marble, bean, dice and two or four coin methods below. This probability is significantly different from that of the three-coin method, because the required amount of accuracy occupies four binary bits of information, so three coins is one bit short. In terms of chances-out-of-sixteen, the three-coin method yields 2,2,6,6 instead of 1,3,5,7 for old-yin, old-yang, young-yang, young-yin respectively.

Three-coin method of IChing Divination:
The three coin method came into currency over a thousand years later. The quickest, easiest, and most popular method by far, it has largely supplanted the yarrow stalks. However, it is significant that the probabilities of this method differ from the yarrow stalks.

Using this method, the probabilities of each type of line are as follows:

While there is one method for tossing three coins (once for each line in the hexagram), there are several ways of checking the results.

How the coins are tossed in IChing Divination:
use three coins with distinct “head” and “tail” sides
for each of the six lines of the hexagram, beginning with the first (bottom) line and ending with the sixth (top) line:
toss all three coins
write down the resulting line
once six lines have been determined, the hexagram is formed

How the line is determined from the coin toss The numerical method of IChing Divination:

assign the value 3 to each “head” result, and 2 to each “tail” result
total all the coin values
the total will be six, seven, eight or nine
determine the current line of the hexagram from this number: 6 = old yin, 7 = young yang, 8 = young yin, 9 = old yang.

An alternative is to count the “tails”:

Another alternative is this simple mnemonic based on the dynamics of a group of three people. If they are all boys, for example, the masculine prevails. But, if there is one girl with two boys, the feminine prevails. So:

Two-coin method of IChing Divination:
Some purists contend that there is a problem with the three-coin method because its probabilities differ from the more ancient yarrow-stalk method. In fact, over the centuries there have even been other methods used for consulting the oracle.

If want an easier and faster way of consulting the oracle with a method that has nearly the same probabilities as the yarrow stalk method, here’s a method using two coins (with two tosses per line):

first toss of the two coins: if both are “heads,” use a value of 2; otherwise, value is 3 second toss: a “head” has a value of 2, a “tail” a value of 3. Add the two values from this toss and the value from the first toss. the sum of the three values will be 6 (old yin), 7 (young yang), 8 (young yin), or 9 (old yang). This provides the first (bottom) line of the hexagram. Repeat the process for each remaining line.

Four coins of IChing Divination:
If you’re comfortable with binary, four coins can be very quick and easy, and like 2 coins matches the probablities of the yarrow-stalk method. Here’s a table showing the different combinations of four coin throws and their binary sum and corresponding line (six lines making a full changing hexagram starting at the bottom). To calculate the binary sum of a four coin throw, place the coins in a line, then add up all the heads using 8 for the left-most coin, then 4, 2 and 1 for a head in the right-most position. The full explanation relating it to the yarrow stalk method is at OrganicDesign:I Ching / Divination.