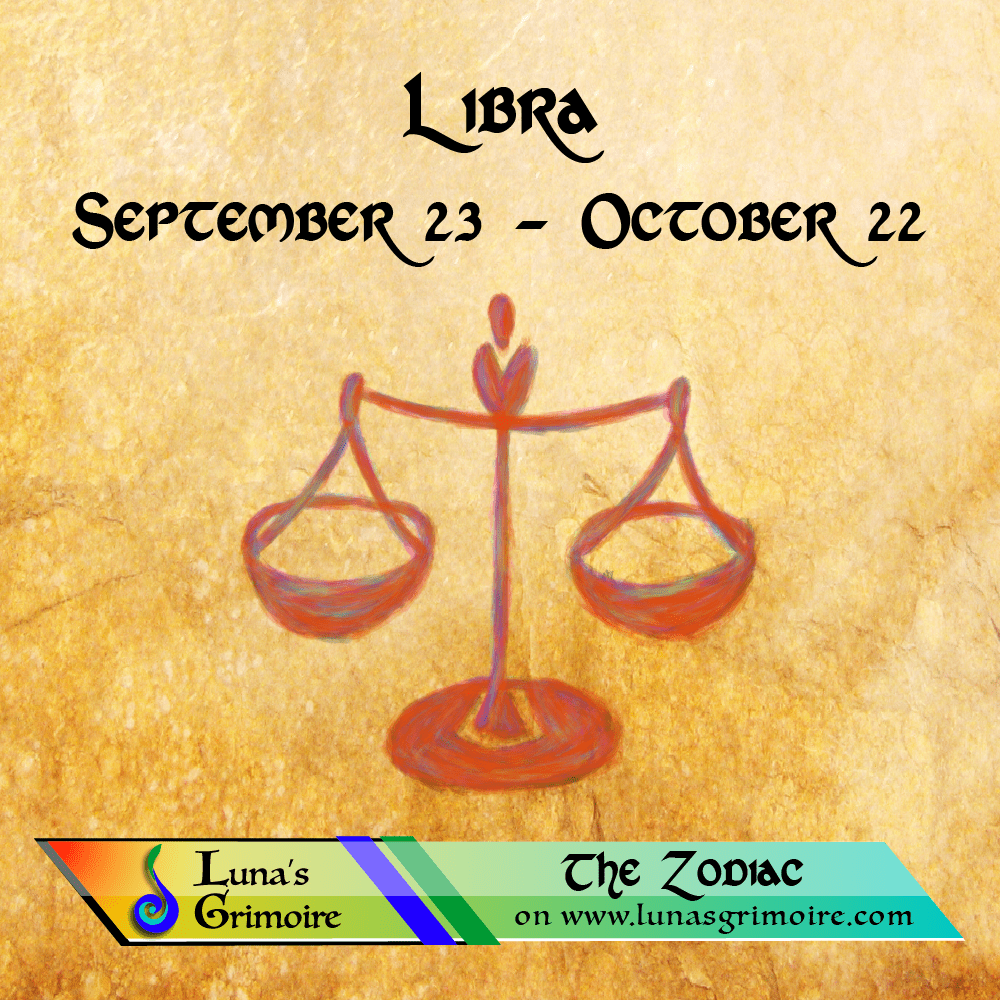 Libra is the only inanimate sign of the zodiac, all the others representing either humans or animals. Many modern astrologers regard it as the most desirable of zodiacal types because it represents the zenith of the year, the high point of the seasons, when the harvest of all the hard work of the spring is reaped. There is a mellowness and sense of relaxation in the air as mankind enjoys the last of the summer sun and the fruits of his toil. Librans too are among the most civilized of the twelve zodiacal characters and are often good looking. They have elegance, charm and good taste, are naturally kind, very gentle, and lovers of beauty, harmony (both in music and social living) and the pleasures that these bring.

They have good critical faculty and are able to stand back and look impartially at matters which call for an impartial judgment to be made on them. But they do not tolerate argument from anyone who challenges their opinions, for once they have reached a conclusion, its truth seems to them self-evident; and among their faults is an impatience of criticism and a greed for approval. But their characters are on the whole balanced, diplomatic and even tempered.

Librans are sensitive to the needs of others and have the gift, sometimes to an almost psychic extent, of understanding the emotional needs of their companions and meeting them with their own innate optimism – they are the kind of people of whom it is said, “They always make you feel better for having been with them.” They are very social human beings. They loathe cruelty, viciousness and vulgarity and detest conflict between people, so they do their best to cooperate and compromise with everyone around them, and their ideal for their own circle and for society as a whole is unity.

Their cast of mind is artistic rather than intellectual, though they are usually too moderate and well balanced to be avant garde in any artistic endeavor. They have good perception and observation and their critical ability, with which they are able to view their own efforts as well as those of others, gives their work integrity.

In their personal relationships they show understanding of the other person’s point of view, trying to resolve any differences by compromise, and are often willing to allow claims against themselves to be settled to their own disadvantage rather than spoil a relationship. They like the opposite sex to the extent of promiscuity sometimes, and may indulge in romanticism bordering on sentimentality.

Their marriages, however, stand a good chance of success because they are frequently the union of “true minds”. The Libran’s continuing kindness toward his or her partner mollifies any hurt the latter may feel if the two have had a tiff. Nor can the Libran’s spouse often complain that he or she is not understood, for the Libran is usually the most empathetic of all the zodiacal types and the most ready to tolerate the beloved’s failings.

The negative Libran character may show frivolity, flirtatiousness and shallowness. It can be changeable and indecisive, impatient of routine, colorlessly conventional and timid, easygoing to the point of inertia, seldom angry when circumstances demand a show of annoyance at least; and yet Librans can shock everyone around them with sudden storms of rage. Their love of pleasure may lead them into extravagance; Libran men can degenerate into reckless gamblers, and Libran women extravagant, jealous and careless about money sometimes squander their wealth and talents in their overenthusiasm for causes which they espouse. Both sexes can become great gossipers. A characteristic of the type is an insatiable curiosity that tempts them to enquire into every social scandal in their circle.

In their work the description “lazy Libra” which is sometimes given is actually more alliterative than true. Librans can be surprisingly energetic, though it is true that they dislike coarse, dirty work. Although some are modestly content, others are extremely ambitious. With their dislike of extremes they make good diplomats but perhaps poor party politicians, for they are moderate in their opinions and able to see other points of view. They can succeed as administrators, lawyers (they have a strong sense of justice, which cynics might say could handicap them in a legal career), antique dealers, civil servants and bankers, for they are trustworthy in handling other people’s money. Some Librans are gifted in fashion designing or in devising new cosmetics; others may find success as artists, composers, critics, writers, interior decorators, welfare workers or valuers, and they have an ability in the management of all sorts of public entertainment. Some work philanthropically for humanity with great self-disciple and significant results. Libran financiers sometimes make good speculators, for they have the optimism and ability to recover from financial crashes.

Libra governs the lumbar region, lower back and kidneys. Its subjects must beware of weaknesses in the back, and lumbago, and they are susceptible to troubles in the kidneys and bladder, especially gravel and stone. They need to avoid overindulgence in food and especially drink, for the latter can particularly harm the kidneys.

Your starstone is the precious Sapphire. The Sapphire is one of the most beautiful and sought after gems in the quartz family. It is considered good luck in many ways and one of the major healing stones.