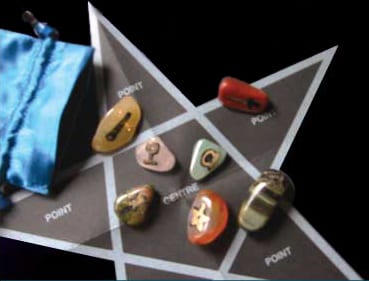 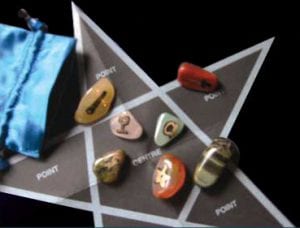 This type of divination is particularly associated with both Witchcraft & Shamanism world-wide.

In France the French word for witch, ” sorcier ” is used for a male witch & ” sociere” is used for a female witch. The witch or sorcier / sorciere is one who practices Sortilege, literally one who casts lots for the purpose of divination.

There are a number of different ways of doing this. I will give details here of one that requires 13 stones & gives good results.

The witch must collect these stones himself / herself, at an appropriate time. Example: By using Astrology or the Moons phases, [ increase of the Moon] or by seeking it on the Great Sabbats. Sometimes a stone will find you, you will be instantly attracted to it & pick it up or buy it, or a stone may be given to you by some one who cares for you. The best place to look for your stones is on the beach, along river beds, during nature walks & picnic outings & in your local gem shop. Look for stones that are curiously marked or have appealing colours.

All the stones must be roughly the same size, the essential point is that all the stones should appeal to you personally as being right for their purpose. If you are using semi-precious gemstones from a gem shop, check your gem charts for the correct attributes before you go shopping.

Magic stone: Any unusual stone, Fossil stone or a stone marked with a star.

Luck Stone: Cross stone, Holey stone, Opal, or any stone that feels lucky to you.

Life Stone: Petrified wood, Agate, Carnelian or any red or flesh coloured stone or a pebble with an ankh marked all round the stone or on its various sides if it is square in shape.

Home Stone: Moss agates, Sapphire, or any stone that is square or reminds one of home.

News Stone: Multi- coloured stone or pebble, its streaks or spots of colours are used to show if the news is good or bad.

Love Stone: Rose Quartz, Botswana Agate or any pink stone or a stone that is roughly in a heart shape.

The stones, cord, bag & cloth are cleansed ritually with the 4 Elements during an Esbat rite. Place all beneath your pillow for one full month, at the next Esbat rite take all outside & offer them up to the Moon before using. Ask the Lord & Lady for wisdom, guidance & then meditate on each stone [ while holding it in your receiving hand ] on what it now will represent in your future divination readings.

The divination is made from the way in which the stones relate to each other as they fall. The diviner must be guided by intuition, as well as by some knowledge of what the different Planets govern.

Here are a few generalised indications:

SUN is a good influence bring light & cheerfulness into a situation.

The stones are thrown within a circle made by the cord or witches’ garter, coiled around upon the cloth or skin which is laid out smoothly upon the floor or table.

The words of an Old Welsh Charm are used when casting the stones:

ADA ADA IO ADA DIA. It is pronounced like this: “ Ah-da, ah-da, ee-o ah-da dee-a” Exactly what it means is now lost in the mist of time, but it isa traditional divination rune or formula of words of power, probably Celtic in origin.

Light a candle & stand it by your cord circle. The room should be dimly lit, or darkened if it is daylight. Light some incense & bless both flame & incense smoke. Bless both salt & water, then place a pinch of salt in the water & stir with wand or finger deosil 3 times, now with your wet finger mark your 3rd Eye & eyelids. Take time to relax & do some deep breathing , then think about your question. Now take up your stone bag & hold it to your third Eye for a moment & then return it to altar or floor. Take your athame & consecrate the cord circle with it, circling 3 times round the cord circle while saying these words:

Magic in the Old One’s Name!

Now lay your athame aside & take out your stones. Hold them in your hands & warm them, shake them from hand to hand as your recite “Ada Ada Io Ada Dia ” 3 times. When you are ready, cast stones completely at random into the cord circle, Then look carefully at the way they lie & consider & interpret them.

You may throw the stones 3 times at a sitting, but no more. This will allow for a general reading & two questions. [ This stone divination may also be done with Coven Esbat rites.]

To answer a question ” YES” or “NO”, a slightly different procedure is followed.

In this case, you use just 3 stones, one for affirmation, one for negative & one for the indicator, laying the rest aside. You use the MAGIC stone for the indicator. If you are asking the question, ” Shall I follow such & such a course of action?”, then you use the JUPITER stone for affirmative & the SATURN stone for the negative. Shake the stones together and recite the rune as before. Cast them into the circle, the answer will be told by which of the stones are nearest the indicator stone. If both are at equal distance, the answer is doubtful & can indicate that the question was frivolous or insincere.

These were not called Rune stones, but “Tell” stones, and were simply a method of divination.

Tell stones were made from clay and were rounded into fairly thick stone shapes. Some were made into a definite ball shape and these were rolled within a wooden frame, about two feet square. The flatter ones were preferable, though, as they could be thrown on a table or onto a flat surface without rolling away. One stone, which represented the querent, was fashioned of plain clay. It was placed on the table, with the other stones held in two cupped hands as the question was asked. These were then thrown onto the table towards the querent stone.

The stones landing neared the querent were closer in time or importance. Any group of stones were read in conjunction with each other. Those that landed with the symbol hidden were removed as they were not communicating. If one landed on its side then its answer was iffy and could go either way.

Although this was a very simple method, with practice a lot could be obtained from these stones. As with any method of divination, the more they were used , the more the practitioner learned of their meanings.

The tell stones had the following symbols on them :

Water – Journeys, distance to be crossed symbolically someone travelling.

A door – A death of something, a finishing, some kind of severing.

A ring – Marriage or a joining of some kind, either people or things.

An apple – The fruition of something; a harvest; combined with the gold spot, could mean the birth of something new.

These, with the plain stone to represent the querent, are the complete set of Tell stones. They can be made from handcraft clay, a stone colour being used and the emblems pained in colours or coloured clay can be used, a different colour for each, and the symbols painted on in a complementary colour. I do not think it matters if the colours are altered, as long as the user knows which is which.