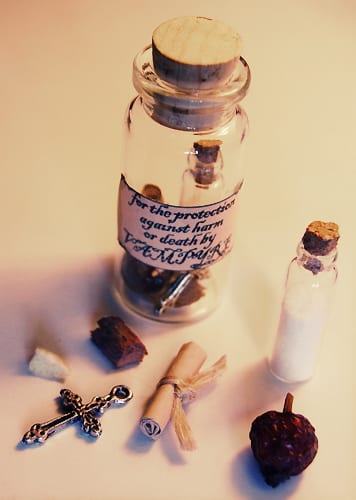 Place each item into a thin, tall bottle, such as a spice bottle. Cap it tightly. Shake the bottle with your projective hand for five minutes while chanting these or similar words:

Herbs and silver,
Copper and grain;
Work to increase My money gain.

Place the money spell bottle on a table somewhere in your house. Leave your purse, pocketbook, wallet and/or checkbook near the bottle when at home. Allow money to come into your life.

When March winds blow, and skies are bleak
And your checking account looks like welfare week
Go to your kitchen with a dash
Find a jar to bring some cash.
Get a tea bag, mint for sure
Brew a cup,
you need no more.
In your little witch’s pot,
Add vervain, not a lot.
In goes dragon’s blood and cinquefoil
Bring it all to a rolling boil.

Mix ingredients, stir it thrice
Cut the heat, throw in some ice.
On paper virgin, write your need
Be specific, ignore the greed.
Put the paper in a jar
To bring in riches from afar.
Call the Fates, yes all three
Ask them for prosperity
Here’s the chant, it’s easy now
Take your time to give it pow.

Three great ladies crossed the land
Each held prosperity in their hand
The first said, “She needs some.”
The second said, “She has some.”
The third said, “There is more to come.”
“We turn three times, the way of the Sun.”

Raise your energy, clap three times
Then seal the brew with a magical sign.
When it cools, pour in the jar
Close it tight, mark with a star.

A minor magic, I call this
To bring you monetary bliss
For extra punch, choose a planetary hour
Full Moon is good, for extra power.
When money comes, thank the Gods
Pour the content on the sod
Return in like the gifts you got
And remember all the blessings brought.

Write your need on the paper and drop it in the jar. Take the seven dimes in your dominant hand and place them one by one into the jar.

As each one drops, visualize it multiplying into huge amounts and say:

Toward this wish, the money grows
By leaps and bounds, it overflows.
Coins that jingle, coins that shine
Come to me now, you are mine!

Write your name on the back of the bay leaf and drop it into the jar. Screw the lid on tightly and put the jar in a place where you can see it every day, but a place where it is not visible to everyone who enters your home.

Add a coin or two to the jar every day, and watch as money flows to you from unexpected sources.

After you obtain the money you need, remove the paper and bury it outside or in a potted plant. Wash the jar and reuse it for another magic ritual later.