Myths and Misconceptions – The Truth About Wicca and Paganism

Home Myths and Misconceptions – The Truth About Wicca and Paganism 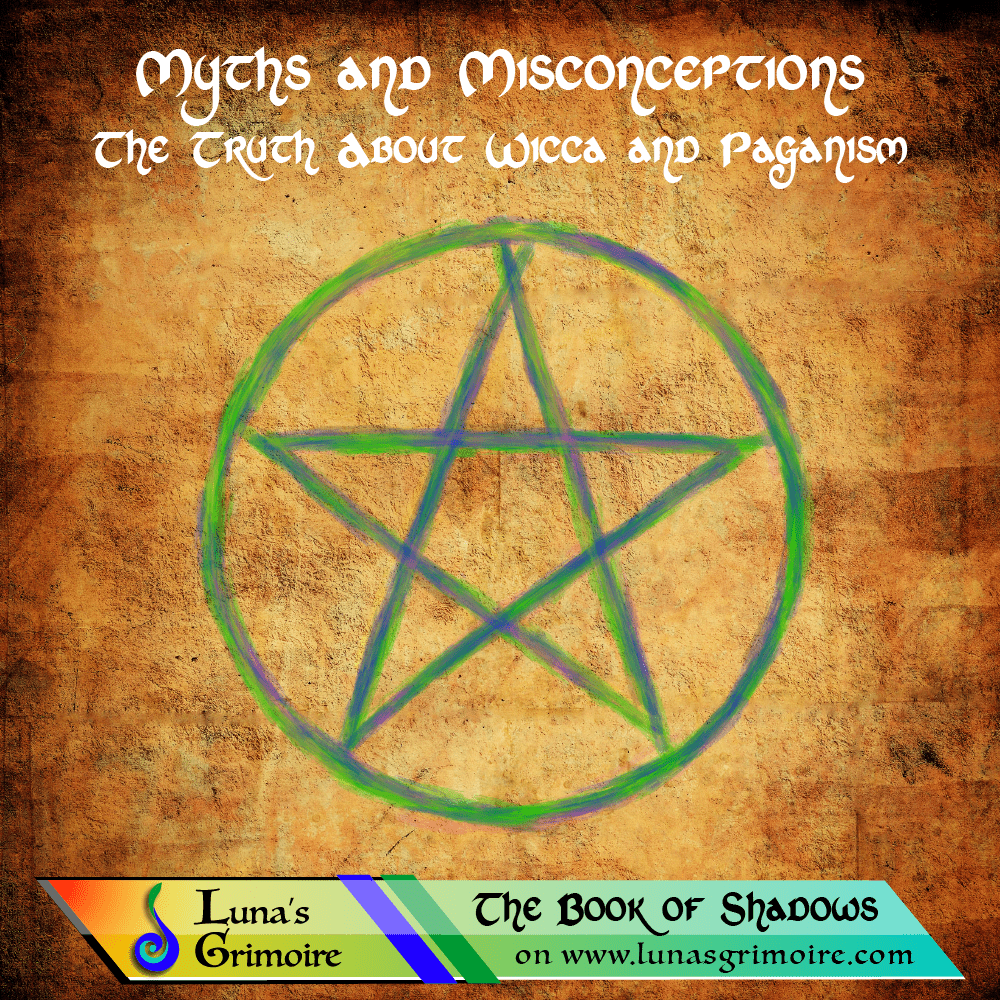 Myths and Misconceptions – The Truth About Wicca and Paganism

Wicca, and paganism on the whole, is flooded with misconceptions and false myths. Some of it was born of fear, some of misunderstanding, and some of blatant ignorance. Today, Luna’s Grimoire strives to educate people about Wicca and paganism, and hopefully, we can help break some of those barriers and create a more welcoming reputation for the misunderstood belief systems.

We wrote this article so that you can share with your friends and loved ones in the hopes that they can better understand the path you walk, and provide some answers to the most asked questions.

Is Wicca a cult?

No, not any more than any other religion. While it’s still quite new, Wicca is a legally recognised religion, founded in the 1950’s by Gerald Gardner. Like any other religion, there are some ritualised practices, and many of them are based on ancient practices, so they can seem a little… odd. Wicca, like paganism and witchcraft, is a spiritual practice like any other religious practice, and with that comes the few who radicalise and become obsessed (we all know that one person who’s trying to save everyone’s soul); they are not the many, who are mainly solitary practitioners that are normal people like you and me.

So, paganism is like an umbrella term for everything that is pre-Christian or non-Christian. Hinduism is a form of paganism, as is Wicca. Now here is where it can get confusing: not all witches are Wiccans, and not all Pagans are witches or even Wiccan. Wicca is a small subset of paganism, and witchcraft, or the Craft, is also under the pagan umbrella. You can be a solitary witch who is not Wiccan, but does follow the pagan wheel of the year and practices some of the teachings of paganism, without actually practicing any Wicca specifically. The best way to end the confusion is to think of it all as witchcraft, because it is the Craft of the witch 🙂

Do pagans and witches believe in God?

In short, yes, but we’re all mostly polytheistic, which means we believe in the many manifestations of god, or the Divine, or the Universe, or Source or whatever new word people use to describe the supernatural power that exists omnipotently in the background while we scurry around worried about annoying them. You will find that many witches have a book of pantheons, or a collection of deities they follow depending on the time of the year or what they are actively focused on manifesting in their lives.

Well, no. The devil, aka Satan, doesn’t exist in our realm as he’s a Christian construct.

But what about going to Hell?

Well, like Satan, hell is a christian construct and doesn’t exist for us. It’s quite liberating as we don’t feel like a deity is responsible for us; we just focus on doing good in the here and now, and try our best to live our best lives and help as many people along the way as possible.

Why do witches use the Satanic symbol?

The pentacle is the five pointed star, which classically represents the elements of fire, water, air, earth and spirit. As to why or how that became a satanic symbol, that’s a conversation for another day.

No. We’re all quite liberated when it comes to sexuality but sexual acts aren’t exactly a part of regular ritual. Many groups practice sky clad (naked) in nature (yes, around a bonfire in a forest), but this is not sexual at all. Now, there are groups who do include polygamy in ritual, but that’s not the norm and should not be viewed as such.

Spellwork is a fundamental part of practice in paganism, Wicca and witchcraft. It’s not like the magick you’ve seen in Harry Potter; we believe in magick in nature. Everyone’s approach to spellwork is different; some pray to the gods, some focus on intent and manifestation. Most will tell you it includes health, prosperity, confidence and a bunch of boring everyday things… not really as fun as levitation and defence against the dark arts…

Why do people become pagans?

As with most religions, many newcomers are here because they aren’t happy with what they have seen previously and they are on a journey to find something that resonates with their heart, head and soul. Most tend to stick around because they find that it’s aligned with most of what they already believe.