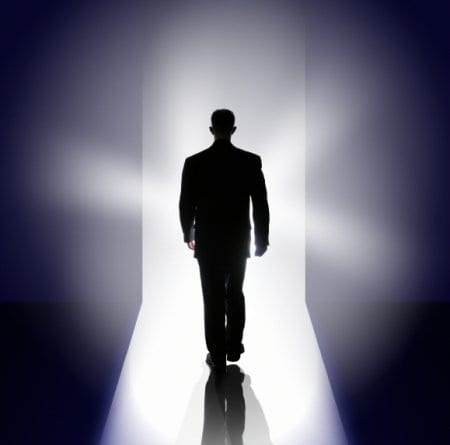 Basically a near death experience happens when a person nearly dies or was clinically dead and then revived. It is during this that many people experience what may be referred to as an out of body experience. People who have had a near death experience report similar experiences such as leaving one’s body and floating above, feeling calm, traveling through a tunnel of bright light, meeting a deceased relative or religious being. Sometimes the person having the near death experience is given a life review, after which they are returned to their physical body.

A near-death experience (NDE) refers to a broad range of personal experiences associated with impending death, encompassing multiple possible sensations ranging from detachment from the body, feelings of levitation, extreme fear, total serenity, security, or warmth, the experience of absolute dissolution, and the presence of a light, which some people interpret as a deity or spiritual presence. Many cultures and individuals revere NDEs as a paranormal and spiritual glimpse into the afterlife. Such cases are usually reported after an individual has been pronounced clinically dead, or otherwise very close to death, hence the entitlement near-death experience. Many NDE reports, however, originate from events that are not life threatening. With recent developments in cardiac resuscitation techniques, the number of NDEs reported is continually increasing. Most of the scientific community regards such experiences as hallucinatory, while paranormal specialists and some mainstream scientists claim them to be evidence of an afterlife. Popular interest in near-death experiences was initially sparked by Raymond Moody, Jr’s 1975 book “Life After Life” and the founding of the International Association for Near-Death Studies (IANDS) in 1978. According to a Gallup poll, approximately eight million Americans claim to have had a near-death experience. NDEs are among the phenomena studied in the fields of parapsychology, psychology, psychiatry, and hospital medicine

Typical Near Death Experience
There are many different accounts of near death experiences reported from thousands of people. But there seems to be several recurrent themes. The general near death experience is as follows : Generally the person hears that they are being declared dead. For what ever reason this seems in some way to maybe be an important trigger. Sometimes they hear a noise that is unfamiliar and maybe makes them feel uncomfortable. They then find they are moving down a tunnel. This tunnel is either very bright or very dark. They then find themselves at the end of the tunnel and out of their body. They may be able to see their physical body. They are totally aware of activity going on around the physical body. Somewhere at this point they seem to be aware they are dead. At this point they are often joined by spirits which are usually long dead family, relatives or friends. Sometimes a spirit that is like a being of light will appear. The being of light will often show a sort of replay of the persons life. This is done in a non judgmental way. It is around this point that the being of light tells them that it is not yet their time and they must return. A moment later they find themselves back in their body. When they awake they will remember every detail of the experience. After the experience the person usually has a different view on life.

Perceived Near Death Experience
A perceived near death experience is usually experienced by those who are ill or undergoing predetermined surgery. It is also experienced by the very old. It is often connected with feelings of detachment, altered time perception, visitors and the journey to the other world. There tends to be a more conscious return to the body. People feel that have had an actual Near Death Experience, but later realize it was not.

Unexpected Near Death Experience
Unexpected near death experience are generally the result of an accident. In an unexpected near death experience there tends to be a flashback of your life. The flashback often appears in bright black and white. There are often feelings of peace and happiness. It also tends to involve a sudden and unexpected return to the body. People report being pulled or rushed back into their body with some speed and force.

Life Reviews During Near Death Experience
During a near death experience about 25 percent of all people report experiencing a life review. In near death experiences involving accident cases the figure seems to be between 40 to 50 percent for this group. Life reviews seem to happen instantaneously. This means that it is not a case of one scene following another but rather your entire life in one instant. There seems to be no judgment or sense of right or wrong. In fact it seems to remind the person that there is so much more to life to do. People who have had these reviews seem to return to life with a new found purpose.

Feeling More Alive After Near Death Experience
People who have had a near death experience often report that they felt more alive when they were dead then when they were alive. Some people feel that maybe in death they were actually alive, sort of a reversal. This feeling seems to be one of the reasons for new vitality after the experience. Changes in values and beliefs often occur in the experience after a near-death experience, including changes in personality and outlook on life, such as a greater appreciation for life, higher self-esteem, greater compassion for others, a heightened sense of purpose and self-understanding, and a desire to learn. Studies have shown that over 90 percent of people who had a near death experience had this feeling.

Case Against Near Death Experience
One of the theories put forward by some people to explain the near death experience is that it is a kind of defense mechanism that our mind uses to protect us and help us cope with death. The brain in some way creates this near death illusion, and in doing so helps us deal with the impending death. Another theory is that because we were resuscitated we were never really dead. Therefore once again it is only our mind playing an illusion on us to help us cope with whatever situation we were dealing with at the time. Another theory is that the near death experience is an hallucination caused by oxygen starvation to the brain. But due to the fact that many near death experiences involve no situation where the brain has been starved of oxygen this theory is mostly disproved. Another theory raises a very important question. How is it that when people have a near death experience there spirit body is wearing clothes. After all, did the clothes astral travel as well? If we thought up the astral clothes then did we also think up the whole experience.