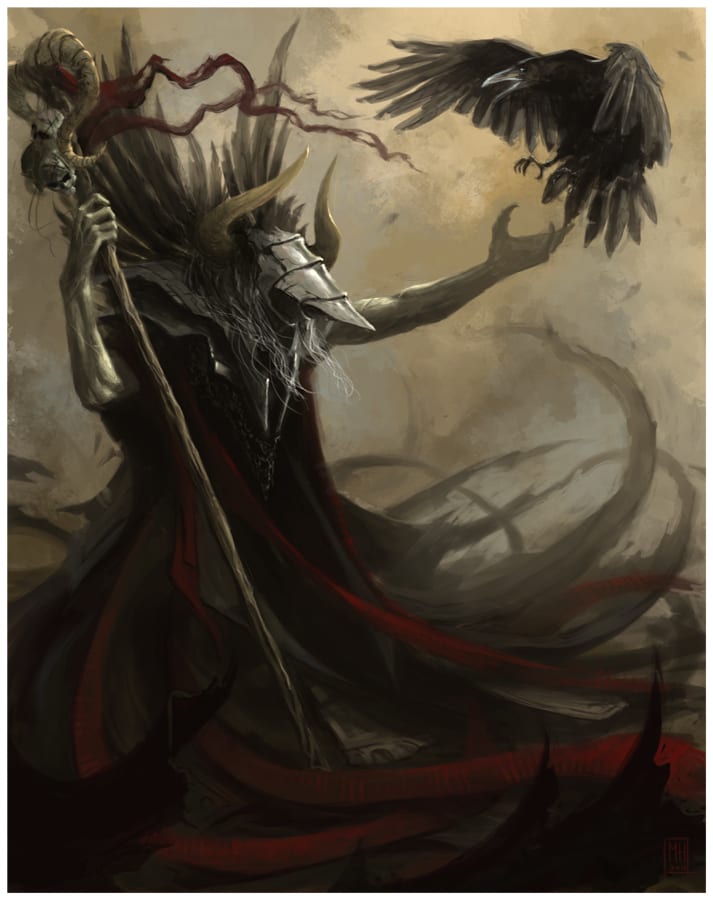 The Study of Death

Death magics have been around for as long as humans have grasped the concept of using magic of any form. Even the most basic division of magics must include a segment for that which is known as Necromancy. Though Necromancy currently has a functional etymology to it, this was not always the case. In the medieval ages, “Necromancy” was called “Nigromancy”, meaning “Black Magic” (interpreted as that which harms the person). Later on, as “Nigromancy” came to be altered into “Necromancy” through Greek and Italian influences, the art gained a new face. Now, instead of simply being an art of injuring the human, it came to also be associated with graves, graveyards, spirits, and primarily of channelling dead spirits like a medium and working with The Angel of Death (cf. http://www.sacred-texts.com/bos/bos195.htm) and heavily influenced by Catholicism and ritual myth or superstitious beliefs about bodies of the dead (cf. http://www.geocities.com/samedhi69/samedhi69.html). These associations, however, are clearly tainted by the early overwhelming dominance of Christian and Catholic thought, which turned the art into an “evil” sacrilege. As such, the beauty of the original Necromancies had been temporarily lost.

As time has progressed and information may now be more freely shared across the internet, the new breed of Necromancer is capable of once again delving into the secrets of death and of illness, as before. There is a quote floating around on the internet which fully expresses this new freedom by reflecting on past oppression: “Once there was a time when all people believed in God and the church ruled. This time is called the Dark Ages.” Now that information can be freely spread, trends in the use of death magic can be seen and formed into a new and pure art of death magic once more with the creeds and cantrips left at the door. In contrast to the Healer, the Necromancer embraces those powers which kill, decay, and decrepidate, and attempts to put them to use. This power goes by many names, but primarily among true Necromancers as Death Essence. It is the power which kills, harms, and causes decay, and that which is of foremost interest to the practitioner of these death magics.

The Necromancer runs into a dilemma while using these essences, however. Regardless how one may try, the fact of the matter is that even Necromancers are living breathing human beings. As such, not even the seasoned practitioner can escape the baneful effects that these energies have on the body. Advanced aging, hair loss, sallow skin, and a gaunt complexion are all traits which are associated (in varying degrees) with the seasoned practitioner. Though the effects may only manifest as internal pains, as well, the fact is that to gain power in this art requires that suffering be present. The Necromancer’s sacrifice for power is often scorned or considered madness, but for the practitioner it is worth the pain. To gather a sufficient sum of energy, the pain of the Necromancer’s own suffering is channelled into a Necromantic Curse, or into a Servitor Summoning. These two components are the basis of every Necromantic spell. Traditionally, the entire art of Necromancy has been broken down into these two branches. The most infamous aspect of necromancy, without doubt, is the creation of phantasmals and undeads. The less flashy but more used aspect is the direct application of the death essences in curses, the imbuement of fetishes, and the decrepitation of organic entities. Addressing the problem of personal decrepidation, however, there rose a spin-off skill of necromancy: vampiric magic.

Vampiric magic is a particular fringe skill of Necromancy focussed on helping the necromancer survive the ordeals of coming in contact with death essences. Instead of simply locking down and bearing the ill effects of death magic, Vampiric magics were born to shoulder some of the weight by allowing a degree of rejuvenation as well as the effects of necromancy to coexist. Only this much is the truth behind vampire tales and the vampire cults that exist around the world. Though there are no “vampires”, per se, there are those necromancers that have refined the ability to use death to drain from the life forces of others. The precise means of doing this is up to the caster to discover but, through absorption of the life forces of other creatures, the necromancer can waylay many of the adverse effects of their art and retain a relatively normal degree of health and well-being at the expense of others. Though there is no proof that this kind of magic can actually extend life beyond the normal duration, it has shown the power to counteract the negative effects of using death magics and to allow the practitioner to live normally. Historically, vampiric magic has taken many different forms. There are those that have consumed real blood in attempts to drain life, based on ideas as far back as the Bible’s statement that “.. the life of the flesh is in the blood” (Lev. 17:11), sexual vampires (hearkening to Aristotle’s claim that life is in the sexual fluids of either gender), and those that drain life force purely, somewhat reminiscient of the breathism and psychic vampire traditions. Note that vampiric necromancy does not mean you’re a vampire, but is an appropriate metaphor for the nature of this skill.

A common mistake to make when attempting to utilize the direct applications of Necromancy is to get caught up in thinking of the effect. If the effect, for example, is to make a person go blind, the most common mistake is for the would-be Necromancer to attempt to try and “think” a person blind. Necromancy, as with all the other castes on The Library of Knowledge, contrasts from the Ritual Magicks because of its use of a) a distinct energy type, and b) a distinct methodology in using that unique energy. The would-be Necromancer’s most common grief is that they can’t “Think Blind” or “Think Sick” someone. The key is in keeping your mind on methods, not effects, and in working the methods of necromancy into an occult science. For example, as one may wish to use the blindness spell, there are a few ways to do it. All ways, however, require one to plan their spell out. That, by definition, is what makes a spell a spell. It’s a mystical blueprint for the methods of magic. If I wanted to cause blindness, given that Death Essence is the energy a Necromancer works with, the most easy and obvious way to do this is load the eyes of your target with sufficient death energies. The absorption technique outlined on the Beginning 2 page works for Death Essence as well, and its the Necromancer’s own pain and decay from absorbing these energies that is channelled into the target. It is much more complex than this example if one literally intends on striking someone blind, but the principles are there. The minor backlash the Necromancer receives throughout their entire body, however, is diminutive compared to the effect of channelling such a vast energy into a concentrated area of a target. With enough effort, this spell will cause permanent blindness, or with a bit of manipulation can deviate to cataracts or optical cancers. Kept in its undeveloped stages, which is sometimes preferable, the Necromancer can blur, dim, or outright blind whomever they choose (though never without consequence). Other effects are attainable by using the very same energy in different configurations and places on your target, and altering properties of the energy’s performance slightly. Blanket-effect spells are also possible, though they drain more from the Necromancer due to the greater amount of energy needed. Aside from the direct application of death energies to an organic being, however, there is also the unique ability to congeal the essences into a form or shape, thus allowing the famous Undeads and Phantasmal servitors.

Legends of the Zombie, Wraith, and Skeleton have been attached to necromancy for as long as it has gone by that name. Visions of the Dead and other such strange phenomenon have been attributed as commonplace to the Necromancer in myth and fable, often making the Necromancer seem insensitive, evil, and morbid. These creatures are used, however, in a manner that shows clearly a Necromancer understands the undead’s psychological effect fully and that the caster truly feels and appreciates the terror in them. The existence of undead creations of a Necromancer are not fable, yet a few misconceptions of their origin, nature, and ability have arisen. As for origin, it should be noted that Necromancers are not able, nor have they ever been able, to raise the physical bodies of the dead to reanimation in any way, shape, or form. The flesh that has died is dead forever, and that is all there is to it. No amount of spellcraft can return the physical dead to physical animation again, for love, or will, or power. The Necromantic Undead is a creation of the caster’s own mind as the result of concentration. Things such as form and motion are consciously preordained by the necromancer and are constructed in much the same way as an elemental servitor might be. Thought-forms given shape and empowered with the death essence may serve the caster in much the same way as a demon might, or some other independent intelligence, with the one exception that these servants are directly controlled by the caster and have no decision making ability outside of the caster’s conscious guidance. These undead or phantasmal servants are given form purely as the Necromancer shapes them — usually in the form of grotesque terrors of the mind — and move, exist, or operate only as the controlling caster deems fit. They are unreal, in the sense of being self-sufficient or substantial, and are necessarily a hallucinogenic projection. As with any spell, the skill lies in the Necromancer’s ability to manipulate these creatures to perform with some similitude of fluid movement. After they have served a purpose, concentration may be broken and the ethereal construct can vaporise.

There are many more surprises to be found in the art of necromancy, but at a price. Success is met with personal anguish and the price of victory — pain. There is no way to sidestep the long hours of hard practice necessary to make this art work, but in the end it is the Necromancer who twists the death ethers to their will and stands as the scholar of magic and master of their own destiny.