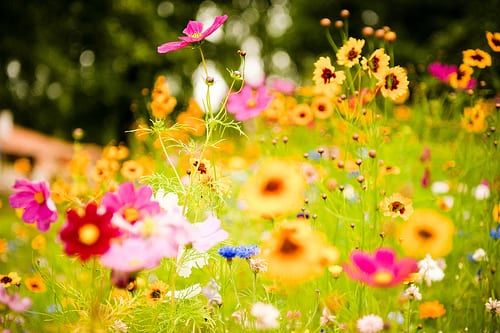 The Goddess blankets the Earth with fertility as the God stretches and grows to maturity. The hours of day and night are equal and light is overtaking darkness. This is a time of beginnings, action, planting spells, and of tending the gardens.  This is the start in the pagan year of spring, at least among Wiccans and Celtics. The first flowers are praised and the God and Goddess thanked for the true return to happier times for all. Ostara is one of the more colorful holidays, not one of the somber colors found in Yule and Candlemas. Feasting and socializing are the important factors in this holiday as well as the celebration of the return of color to the natural world.
In the Christian calendar, again to draw early worshippers, they marked this as the final days and  rebirth of Jesus (when according to history he died in June!)

This is the time of the year when the Sun moves into 0 degrees Ares. Traditionally it is a season of birth and rebirth of resurrection following the long winter. The time when the Pagan Sun God begins to makes to make it known that He is well on His way from going from the Sun Babe to the Sun Prince.

ACORNS—may be planted as part of the festival/celebration. It should have been gathered the previous year and is symbolic of life renewing itself. While planting concentrate on those attributes which you already possess and would like to see become stronger in yourself.

BULBS–Any type, daffodils, crocus, tulips, what-have-you are very appropriate for altar decorations and for planting at this time.

CINQUEFOIL–add some of this to your incense. It should have been gathered either under the light of the full moon or at mid-night as the day changes between Wednesday to Thursday under a waxing moon. It brings a sense of communication and awareness to the ritual and when burned as incense will bring friends closer and is said to bring dreams of one’s perfect partner.

DOGWOOD–the flowers will bring beauty to your altar and the dried bark may be ground and added to the incense. It is one of those beautiful and voluptuous symbols of spring.

HONEYSUCKLE--grace the perimeter of the Sacred Circle. It is an herb of Immortality and represents the ever constant cycle of life renewing itself.

IRIS--the ground root is added to the incense mixture. It has long been held as a Religious Herb and is named for the deity who leads the souls to the Elysian Fields. In Egyptian lore the Iris is noted as having been carved upon the head of a magickal want to represent the scepter of the pharaoh. It was though the three petals represented the virtues of faith, wisdom and valor.

JASMINE–may be added to the ritual cup and/or used as incense. It is most often associated with t he Goddesses and is considered sacred to Diana of Ephesus, in later years it was dedicated to the Virgin Mary. It is sacred to Quan Yin. It is related to the female/maternal aspects of the universe.

ROSE–Yellow are most appropriate but any color will do, they should adorn the altar. The rose is the most sacred symbol of Aphrodite and represent beauty in its purest aspect.

SEEDS–any and all seeds you have collected from the previous year should be placed upon the altar so that they may blessed by the Priest and Priestess for spring planting.

TANSY–should be baked into the ritual cakes. It is also considered an herb of Immortality and is associated with many Christian festival of Easter. When added to your batter it represents the eternalness of life.

VIOLETS–make beautiful altar decorations. They carry the virtues of modesty, simplicity, serenity and peace. They are a particular source of inspiration and good fortune for women. Violets originate from the nymph Io, daughter of the river god Inachus. She and Zeus developed a romance and when another of Zeus’ lovers heard of this she became so jealous that she cast as spell and changed Io into a heifer! In Zeus’ great love and compassion for her he changed her into the Violet.