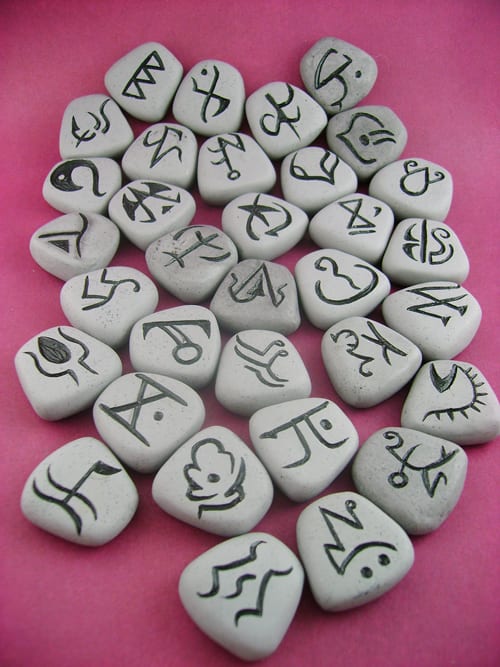 Runes are the alphabet of the ancient northern European tribes, the northern Celts, the Vikings, and ancient Germans. Runes came into usage at least two centuries before the common era, and may have evolved after contact with the “civilized” people of the Mediteranean. The word rune is believed to have it’s origins in the Gothic word runa, meaning secret, mystery or whisper, and the old German word raunan, which means to cut or to carve. Carved Runic inscriptions have survived all over northern Europe- Ireland, Scandinavia, the Ukraine, Iceland. There are several different forms of the alphabet, and the one most often used today for fortune telling is the Elder Futhark, which was the Norse version of the alphabet.

From the earliest times, Runes were associated with magick. In his “Germania”, the Roman historian Tacitus wrote how the priests of Odin could use the Runes as an oracle; a branch was torn from a fruit bearing tree, and cut into strips. On each strip was painted the symbol of a single rune, and then the lot were cast into a white cloth. A priest of Odin would then pick three at a time, and from the particular combinations, he could divine the future. Runes were also used to carve “cursing stones”, to defeat tomb robbers. The partial inscription on one ancient Swedish tomb stone reads, “I hid here magic runes undisturbed by evil witchcraft. He who destroys this monument shall die in misery by magic art”. It’s little wonder that so many of these ancient monuments have survived! Runes were even credited with bringing the dead back to life- an old Norse poem translates as-

“A twelfth magic I know When I see on high
A corpse swinging from a rope
Then I cut and paint runes
So that the man walks and speaks with me”.

So strong was the association between pagan magic and the Runes, the Catholic church finally banned them in 1639. As late as the 17th century, people in Iceland were condemned to death for merely possessing any object upon which runes were carved or written!

The basic difference between the two divining systems is quite simple: In a runespread, you select the runes for the reading from a hidden cache and place them in a pattern to be read according to their positions relative to one another. In a runecast you throw or drop the runes so that they fall randomly onto the runecasting surface and read them according to their location upon the surface.

Another major difference is in the method of interpretation. With a runespread it is common to use reverse and converse interpretations for many runes. For example, Berkanan upright can mean growth, whereas Berkanan reversed (upside-down) can indicate shrinkage or lack of growth, and Berkanan converse (face down) can mean hidden growth. So, with a runespread it is a simple matter to place the drawn rune onto the casting surface in exactly the same aspect it came to hand.

For an overview of an entire situation, state the issue aloud and draw a single rune. The rune drawn will encompass the entire matter from past to future, actions and outcome. This is particularly useful with a very critical matter for which you seek instant guidance.

With the issue stated aloud, draw three runes and place them Right, Centre and Left. The first rune (Right) speaks of the situation as it now is. The second (Centre) suggests the course of action called for. And the third rune (Left) foretells the outcome which will result from that action.
Alternatively, if you are seeking to remove an obstacle from your life or your progress, you may read the runes:

Right – myself at present
Centre – the challenge or obstacle
Left – the best possible outcome if I am able to overcome the obstacle.

As to the matter of how to remove the obstacle for a satisfactory outcome – a supplementary cast of Odin’s Rune may provide the answer.

This is a six rune cast which will give you an in-depth analysis of an issue. It is similar to the classic Tarot layout, but who knows which came first?

My intuition tells me the runes follow the form of the Celtic Cross which was a common motif in Northern Europe even in pre-Christian times. Tarot is reputed to originate in ancient Egypt, but there is no evidence to link this to Bronze Age Europe. Most probably the two similar methods developed independently.

State the issue and draw six runes in the manner stated above. Cast them Right, Near Centre, Left, Near, Far Centre, Far.

The Right rune represents the past, the situation which has brought this issue to exist.
The Near Centre rune represents you now and the Left is what lies ahead of you.
The Near rune (known as the Foundation) gives the underlying basis of the issue, often subconscious or unrecognised reasons why the position has arisen.
The Far Centre (known as the Challenge) represents the nature of the obstacles or blockages which you wish to overcome.
The Far rune (known as the Outcome) foretells the best outcome you can anticipate if overcoming the challenge.

The Thor’s Hammer Draw
Place the runes unseen in the runebag. Swirl the runes around in the bag gently with your writing hand, and let a Rune fall naturally into your fingers. Feel it and sense whether it is the right one to draw. Draw the runes one at a time and place them on the field in the pattern shown on the left.

Never turn the runes – place them exactly as they come to hand on the field. Whether they are upright or reversed (i.e. upside down or right way up), and whether they appear converse or obverse (i.e. face down or face up) may make a difference to the meaning. Interpret the runes according to their position as follows:

Interpreting a Runecast
But in a runecast it is obviously impractical to take these alternative interpretations into account because the runes can fall at any angle. With a random pattern like the runecast it would be altogether too restrictive to limit the interpretation of individual runes in this way. It would curtail some of the more complex and subtle relationships between the neighbouring runes in the cast.

It is important that you adopt a divining method that suits you and provides useful results. If you feel the need for a more disciplined method than a random cast, construct your own casting field on a paper or cloth, or even a marked diagram on the ground. Choose a format that has significance to you, rather than just accepting a predefined pattern such as Freya Aswynn’s Nine Worlds.

With experiment and practice you will develop your own runecasting method that works with your rune set and and your psyche. Once you have found a system that works for you, stick to it. Consistency in method is one of the keys to successful divining.

The Germania Cast
Take all of the runes in your hands and cast them on the surface. You can throw the runes gently onto the surface, or you can let them fall from your hands from a height of about 8-12 inches (20-30 cm). You may wish to invoke the aid of one or more of the gods of the Northern Tradition at this point. Odin is always a good choice, but I do not recommend calling on Thor.

Discount any runes that fall beyond the perimeter of your casting surface and, without looking at the runes, pick three at random. Once you have the chosen three, set them down in a row and interpret them using the three-rune spread rules.

The 9 Rune Cast
For a detailed overview of a situation, or an examination of your spiritual path try the 9 rune cast. Pick nine runes unseen from the runebag and hold them in both hands while you formulate your question. Then throw or let the runes fall onto your casting surface. Face up runes relate to the current situation and the circumstances which led to it. Those near the center are more relevant than those at the periphery.

Once you have considered the face up runes, turn over the others without changing their relative positions. (I find it useful to temporarily turn the face-up runes over at this point so I can concentrate on the now-revealed face down ones.) These face-down runes represent external and/or future influences thus pointing to possible outcomes.

You must decide for yourself how the relative positions of the runes effect the cast. When you have performed a number of casts and decided on meanings for various positions or patterns you will be able to formulate your own conventions for interpreting your runecast in future. It is important to be consistent in your interpretations, so once you find the meaning for a form or pattern that fits your situation, always try to keep to the same interpretation in the future. But don’t be too restrictive in setting rules. In other words, you should not be tempted to see every triangle or square as a set pattern that must mean the same thing every time.

Rune casting is a very subjective practice that depends as much on your mindset as it does on the runes themselves, so be open-minded and ready to reassess your judgement from time to time.

Alternative Divinatory Meanings of the Runes

Some systems of Runes use a 25th Rune called Odin or wyrd. This rune is blank and is defined as the rune for things yet to be revealed.

For divinatory purposes runes are often arranged in patterns known as “spreads”. In a spread the sequence in which runes are drawn determines their position and significance. Each place in a rune spread has a meaning attached to it, so the first rune might represent “past events”, the second “that which prevents growth”, the third “current situation” etc. Spreads can range from anything from two runes up to a full 24-rune layout. All spreads in use today are modern inventions since we know very little about ancient forms of divination involving the runes. Spreads are a useful divinatory tool. Many people will find one particular spread they like and use this consistently. Others will make use of different spreads depending on circumstances and the type of information they are hoping to obtain.