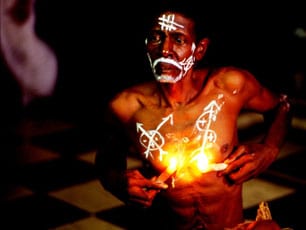 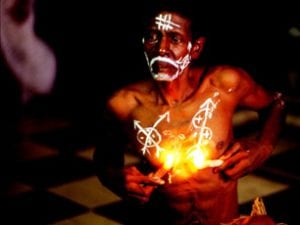 Often referred to as a Cuban mystery religion, the word santería literally means “the worship of saints.” A blend of Catholicism and Nigerian paganism that evolved centuries ago, when Yoruba slaves were taken from Nigeria to Cuba, santería consists of a panoply of saints, or orishas, which are a combination of Catholic saints and Yoruba gods and goddesses. Many of these orishas resemble mythological gods. For example, Elegguá, a messenger of the orishas and the guardian at the gates, sounds a lot like Mercury. Oshún, the orisha of love and marriage, is the equivalent of Venus. Changó, the patron saint of fire, thunder, and lightning, could be compared to Zeus.

Over the centuries, some of the orishas became associated with saints of the opposite gender, so they actually have two names. Changó also goes by the name of St. Barbara, the Virgin Mary of the Middle Ages. Obatalá, the patron saint of peace and purity, is also known as Our Lady of Mercy.

When an initiate to the religion becomes as antero (or santera, if she’s female), he agrees to “worship the saints, to observe their feasts, obey their commands, and conduct their rituals,” writes Migene Gonzalez-Wippler, author of The Santería Experience. “In exchange for this absolute submission, he gains supernatural powers, protection against evil, and the ability to foresee the future and even to shape the future according to his will.”

Casting spells is part of a santero’s work. As in other magical practices, there are spells for virtually anything and everything. A spell to overcome an enemy requires the use of a snake’s skin as well as snake oil. Ingredients for such spells can be found in a botánica, a Hispanic religious goods store. A santero often keeps icons or statues of the orishas and other saints on his altar, along with flowers, a bowl of water, and a bottle of Florida water (a type of cheap cologne used in many of the spells). The darker side of santería, known as mayomberia, is a type of black magic.