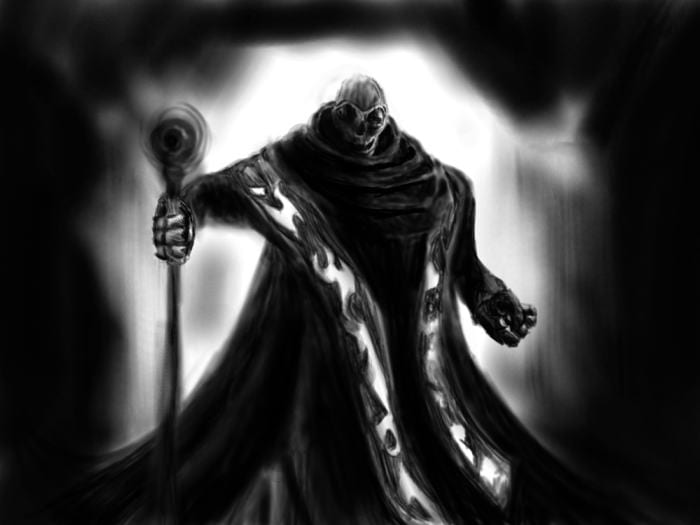 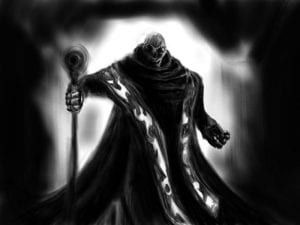 Deities and the Cosmos

Foreword: It should be noted that the satanism discussed on this page, though loosely based around the La Veyan “Satanism” (which is used here only for the convienience with which it breaks down satanic magic), does in fact extend to satanism as well (which is actually the true focus of this page). It should not be inferred that I support La Vey, or that the use of his analogies or spell structures means that I endorse anything else he says.

Satanism as a magical or religious art focusses primarily on one question: Why are we here? This site being about magic, not religion (though it does occasionally impose itself into the magical framework, and mostly so in the art of Satanic magic), I will ignore the various religious answers and move straight to the magical philosophy behind that question. Pop culture indicates one of two answers to the reason of our existence:

We are solely for the purpose of worshipping God the Creator, or some grand entity therelike, and to base our existence around pleasing this cosmic entity by following rules of conduct and morality.

We are here because of a big explosion which was followed by gradient evolution, relying on a chemical soup of unknown composition and mere chance to cause sequence after sequence of minor change over a span of millions of years to produce everything now seen. Therefore the supernatural is either non-existant, or doesn’t play a part in life.

A Satanist once told me that this only presents two options: Poof or Bang (respectively). To a Satanic Magician, both of these options are unusable. If the first is true, then we are here only for worship to an omnipotent entity who shows no physical manifestation on earth. The Satanist poses the question “Why doesn’t God speak with a thunderous voice any more? Why, if He exists, does He not prove His existence anymore with loud speeches and fire from Heaven? Where is the concrete, easily found and undeniable proof?” The second option is unusable as well. If random energy were to cause order in the universe, why does entropy exist? The Laws of Thermodynamics (and particularly entropy) prohibit the possibility of the theory of evolution from being true (cf. ARN.org), as is becoming more and more apparent in scientific circles (especially in the different sub-disciplines of physics).

So, now having discluded the two major views of origin, one wonders where the Satanist stands on this subject. The answer is “in the centre of everything”. Satanic magic is focussed on the worship and building up of your own soul as unto the potential of a major deity. Every person, in the Satanic view, is a god unto themselves and an eternal being of equal potential power to that of any existing entity. The Satanic Magician may or may not, in this view, believe in Satan or other demons, and may not even pay heed to the existence of any kind of spirit at all. The important part of any mystic operation, to the Satanist, is the accumulation of basic terrestrial power and using this energy to manifest itself in a tangible and usable format in the visible mundane world. Instead of seeking power from the external world or planes, the search continues on an intrapersonal level, or perhaps with terrestrial entities (such as minor demons). This is the contrast between Celestial magics and Satanic magics — one seeks aid from the outside, and another from the person.

Satanic Magicians are not bound by the moral rules or laws that typical magicians must adhere to. Their magical methods include only spells which bring satisfaction to themself through the use of infernal and/or Satanic powers. According to The Satanic Bible (I can not provide a link to it, since it’s a copyrighted work that can not legally be reproduced without giving royalties, etc.), in the book of Leviathan it states that there are three types of spells available to Satanic casters:

As is common to form, each will be discussed in turn.

Spells of Compassion may seem to be a contradictory concept, given that the Satanic magics are focussed on the caster as beneficiary but, in actuality, it is quite feasible that the caster can receive pleasure from the joy of another. When casting spells of compassion, as with other types of spells in the Satanic realm, one must be entirely sure that they could be perfectly satisfied with the results. A wonderful briefing on the topic of definitive spell-casting is a book by Aleister Crowley called Magick without Tears. The concept of casting magic without any remorse can be condensed into one example: If you were, for example, to cast a spell to make your ailing friend well again, would you be perfectly happy if they were back to full health in a couple days? This depends on a few factors. Do you like your friend that much? Is he/she a nice person? Is their presence better than their absence? Things of that nature must fully be taken into account so that every spell is picture perfect.

The second type of spell is a Spell of Destruction. Once again, exactly like the considerations necessary for a Spell of Compassion, the idea of “Do you really want your spell to work?” (i.e. Magic without tears) must be taken into account. Often, the destruction of one involves the destruction of many. If, for example, you hate your boss so much that you want to cast a destruction spell on them, take the time to consider that part of your boss’ destruction might involve the bankruptcy of his/her company which, being your boss, would also be *your* company. Also, be sure that a spell of this power is never used as a joke. You must be totally, entirely, 100% certain that you wish the absolute obliteration of your target. No “just hurt, don’t kill” mentalities. The ultimate end of a spell of destruction is the death of the target.

The last type of spell is a Spell of Lust. These spells are very peculiar, in that lust is not a naughty concept for the Satanic magician. On the contrary, using sex merely for pleasure and the acquisition of power is quite common. A real, dedicated Satanist/Satanic magician is not concerned about the moral trappings of having sex and is quite free with the sharing and use of their body for such a purpose. After all, chastity and morality are Christian virtues, not a Satanic ones. Though Satanism the religion does not conscribe to the wild orgies commonly attributed to it through the media, Satanic magic does. I should note at this point that it is not a compulsory component of Satanic Magic to use sexuality for power, but only that it is a method. Satanists are often not counterculture and would be uncomfortable performing these rituals. If that is the case, given that the object of these spells is Self, it should not be performed. When a lust spell is cast, as per The Satanic Bible, the Satanic magician does more than perform the act itself; energy is also absorbed. Sex rituals can comprise a large amount of the power base for the Satanic magician because of the large amount of energy expended in both members during a stimulation/copulation ritual. This energy, instead of being ignored and going to waste, is absorbed by the Satanic magician and is channelled into a new spell.