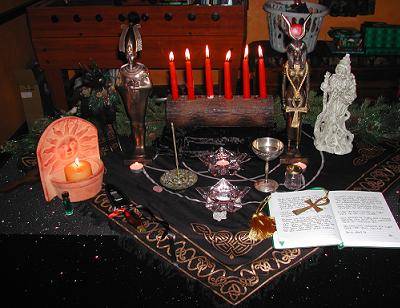 Yule is the time of year when Pagans and Wiccans celebrate the Winter Solstice. If you’re in the Northern Hemisphere, this will be on around December 21, but if you’re below the Equator, your Yule celebration will fall in June. This Sabbat is considered the longest night of the year, and following Yule, the sun begins its long journey back to earth. Try some or even all of these ideas — obviously, space may be a limiting factor for some, but use what calls to you most.

Colors of the Season:

Winter is here, and even if the snow hasn’t fallen yet, there’s a definite chill in the air. Use cold colors to decorate your altar, such as blues and silvers and whites. Also find ways to include the reds, whites and greens of the season. Evergreen boughs never go out of style, so add some dark greens as well. Cover your altar with a cloth in a cool color, and then add candles in a variety of different wintery shades. Use candles in silvers and golds — and sparkle is always good too!

Yule is a Sabbat that reflects the return of the sun, so add solar symbols to your altar. Gold discs, yellow candles, anything bright and shiny can represent the sun. Some people even get a large pillar candle, inscribe it with solar symbols, and designate it as their sun candle. You can also add evergreen boughs, sprigs of holly, pinecones, a Yule log, and even Santa Claus. Consider antlers or reindeer, along with other symbols of fertility.

Other Signs of the Season:

There’s no limit to the number of things you can put on your Yule altar, as long as you’ve got the space. Consider some of these items as part of your Sabbat decor:

Deities of the Winter Solstice

While it may be mostly Pagans and Wiccans who celebrate the Yule holiday, nearly all cultures and faiths have some sort of winter solstice celebration or festival. Because of the theme of endless birth, life, death, and rebirth, the time of the solstice is often associated with deity and other legendary figures. No matter which path you follow, chances are good that one of your gods or goddesses has a winter solstice connection.

Alcyone (Greek): Alcyone is the Kingfisher goddess. She nests every winter for two weeks, and while she does, the wild seas become calm and peaceful.

Ameratasu (Japan): In feudal Japan, worshippers celebrated the return of Ameratasu, the sun goddess, who slept in a cold, remote cave. When the the other gods woke her with a loud celebration, she looked out of the cave and saw an image of herself in a mirror. The other gods convinced her to emerge from her seclusion and return sunlight to the universe.

Baldur (Norse): Baldur is associated with the legend of the mistletoe. His mother, Frigga, honored Baldur and asked all of nature to promise not to harm him. Unfortunately, in her haste, Frigga overlooked the mistletoe plant, so Loki – the resident trickster – took advantage of the opportunity and fooled Baldur’s blind twin, Hod, into killing him with a spear made of mistletoe. Baldur was later restored to life.

Bona Dea (Roman): This fertility goddess was worshipped in a secret temple on the Aventine hill in Rome, and only women were permitted to attend her rites. Her annual festival was held early in December.

Cailleach Bheur (Celtic): In Scotland, she is also called Beira, the Queen of Winter. She is the hag aspect of the Triple Goddess, and rules the dark days between Samhain and Beltaine.

Demeter (Greek): Through her daughter, Persephone, Demeter is linked strongly to the changing of the seasons and is often connected to the image of the Dark Mother in winter. When Persephone was abducted by Hades, Demeter’s grief caused the earth to die for six months, until her daughter’s return.

Dionysus (Greek): A festival called Brumalia was held every December in honor of Dionysus and his fermented grape wine. The event proved so popular that the Romans adopted it as well in their celebrations of Bacchus.

Frau Holle (Norse): Frau Holle appears in many different forms in Scandinavian mythology and legend. She is associated with both the evergreen plants of the Yule season, and with snowfall, which is said to be Frau Holle shaking out her feathery mattresses.

Frigga (Norse): Frigga honored her son, Baldur, by asking all of nature not to harm him, but in her haste overlooked the mistletoe plant. Loki fooled Baldur’s blind twin, Hod, into killing him with a spear made of mistletoe but Odin later restored him to life. As thanks, Frigga declared that mistletoe must be regarded as a plant of love, rather than death.

Holly King (British/Celtic): The Holly King is a figure found in British tales and folklore. He is similar to the Green Man, the archetype of the forest. In modern Pagan religion, the Holly King battles the Oak King for supremacy throughout the year. At the winter solstice, the Holly King is defeated.

Horus (Egyptian): Horus was one of the solar deities of the ancient Egyptians. He rose and set every day, and is often associated with Nut, the sky god. Horus later became connected with another sun god, Ra.

La Befana (Italian): This character from Italian folklore is similar to St. Nicholas, in that she flies around delivering candy to well-behaved children in early January. She is depicted as an old woman on a broomstick, wearing a black shawl.

Lord of Misrule (British): The custom of appointing a Lord of Misrule to preside over winter holiday festivities actually has its roots in antiquity, during the Roman week of Saturnalia.

Mithras (Roman): Mithras was celebrated as part of a mystery religion in ancient Rome. He was a god of the sun, who was born around the time of the winter solstice and then experienced a resurrection around the spring equinox.

Odin (Norse): In some legends, Odin bestowed gifts at Yuletide upon his people, riding a magical flying horse across the sky. This legend may have combined with that of St. Nicholas to create the modern Santa Claus.

Saturn (Roman): Every December, the Romans threw a week-long celebration of debauchery and fun, called Saturnalia in honor of their agricultural god, Saturn. Roles were reversed, and slaves became the masters, at least temporarily. This is where the tradition of the Lord of Misrule originated.

Spider Woman (Hopi): Soyal is the Hopi festival of the winter solstice. It honors the Spider Woman and the Hawk Maiden, and celebrates the sun’s victory over winter’s darkness.