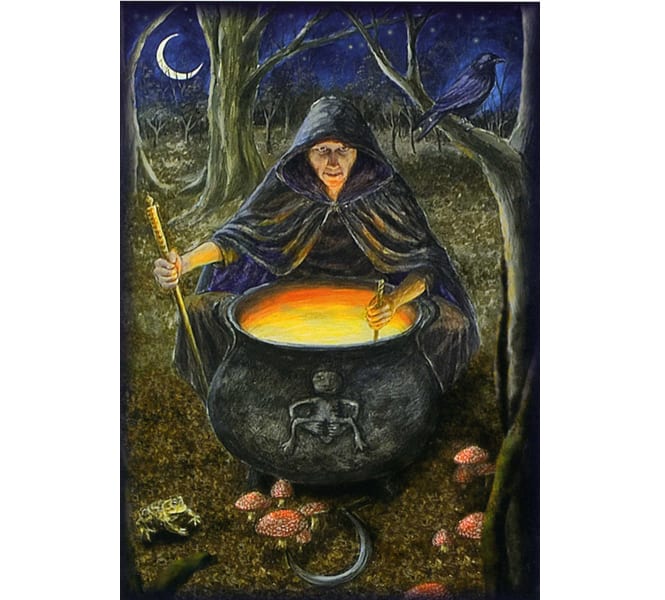 The Crone is commonly conceived of as an elderly Grandmother, and represents the last stage of life when the body is at it’s weakest, but psychic and magical power are at their strongest. The Crone represents the height of Feminine power, and the wisdom and experience which comes with age. The Crone is the Goddess of wisdom, magic, and spirituality, and is traditionally thought of as the Patron of Witches and Witchcraft.

The Crone is the Goddess of death and endings. She is associated with the Waning Moon even as the Maiden is associated with the Waxing Moon, and the Mother with the Full Moon. As such the Crone represents the ending of one cycle and the beginning of the next. In this way She is a Goddess of transformation and regeneration -the night without which there could be no dawn, the Alchemical NIGREDO or period of decay which creates the fertile conditions for new life to grow.

As Goddess of Death the Crone breaks down our old forms to make change and rebirth possible. Since the soul can never be destroyed but can only change its outer shape, death must be understood not as an ending, but as a process of growth and continual regeneration -thus the Crone is not so much the Destroyer as the Transformer, and Her work is a benefit to the soul which would otherwise grow stagnant and be unable to complete it’s purposes in the material world. Without the “destruction” brought by the Crone, physical form would be immutable and thus limiting rather than empowering to the soul.

In this sense the Crone might be compared to science’s BLACK HOLE, constantly swallowing up matter in one place only to spit it back out in a new form elsewhere.

This aspect of “destruction” is one reason why the Crone is often regarded with fear. Because we readily perceive the destruction of the old form, but rarely see the emergence of the new one, we are afraid of change. We do not realize that only through change can growth come. And so for many the Crone Goddess is a fearsome and terrifying Deity. But this should not be so to the Wiccan, who should strive to understand Her inner mystery of rebirth and regeneration.

As well as a Goddess of death the Crone is also a Goddess of wisdom, and of secrets revealed. The Crone rules all of the arcane arts and as Goddess of the Otherworld is Patron of the higher powers of the soul. It is in this sense that She is Patron of Witchcraft. But here too the Crone is sometimes perceived as a terrifying figure -for the path to wisdom is not an easy one, and the seeker is confronted with many challenges, chief among which is the need for self knowledge. Nothing does more to empower us and further our psychic and spiritual growth than knowledge of self, yet it is often the case that few things terrify us more -because in knowing ourselves we must in time confront and heal every weakness, every regret, every psychic wound which wehave suffered, and most of us would rather just bury these. This path of self knowledge is the very heart of true Wicca, and is the demesne of the Crone.

It is as the Patron of the quest for self knowledge that the Crone most often figures in mythology. Whether as Baba Yaga in contemporary Russian folklore, or as Venus in the story of Cupid and Psyche, a central myth of the Crone has a youthful protagonist seek Her out in search of some boon, great or small. The Crone -Who is usually portrayed as living far from the mundane world, as true wisdom often does- always agrees to grant the boon which is sought, but only if the protagonist can fulfill a series of seemingly impossible feats. Many others have failed before, the frightened protagonist is told. Yet -usually with supernatural help, commonly in the form of “the animals”- this protagonist succeeds against all odds and gains the desired boon.

From this myth it can be seen that while the uninitiated may view the Crone as a fearsome and terrible Goddess, those who confront Her mysteries without fear will invariably find Her their benefactor.

Below follow several examples of the Goddess as Crone:

BABA YAGA -Baba (Grandmother) Yaga is the Russian form of the Crone Goddess. Yaga figures in many contemporary folktales in which a young protagonist seeks out or stumbles upon Her enchanted cottage, and asks a boon from Her -receiving it after fulfilling many near impossible tasks. Baba Yaga is portrayed as an ancient and wizened Witch, Who flies through the air in a magical MORTAR AND PESTLE, or sometimes a flying horse, and has power over the elements. Yaga lives in a remote forest in a magic cottage which walks around of its own accord on giant chicken’s legs, and Her home is guarded by a fence of stakes on which are mounted the skulls of unsuccessful seekers (The protagonists own previous lives).

HECATE -Hecate is the ancient Greek form of the Crone Goddess. Associated with the Moon, Hecate was often shown with three heads or faces, or as three women standing together, to represent the Moon’s three phases -and in this sense Hecate has aspects of Maiden and Mother as well as Crone, though it is primarily as Crone that She is worshipped. Goddess of prophesy, magic and Witchcraft, Hecate was worshipped at the crossroads, and was considered a Queen of the Otherworld. Her principle symbols included the Key and the Torch, as Her wisdom could unlock and illuminate all mysteries. Hecate’s totem animal was a black dog. In medieval Europe Hecate was called Dame Hecat.

KALI -Kali is the most famous Hindu example of the Crone form of the Goddess. Kali is usually shown as a jet-black Goddess with many arms, wearing a necklace of skulls which represent the cycle of Death and Rebirth. Sometimes also She wears various other human body parts or serpents as part of Her costume. Her blood-red tongue is shown extended, like that of the Greek Gorgon, showing Her regenerative aspect. Kali’s consort is Shiva the Destroyer, and She is often shown standing or dancing upon His recumbent body, as Goddess of Death and Transformation.

MORRIGHAN -Morrighan is the Irish name of this Celtic form of the Crone Goddess, and means “Queen of Ghosts” emphasizing Her role as a Goddess of the Dead. Other versions of Her name, such as Morgana and Morgaine, make reference to the sea -which in insular Celtic religion is associated with the Otherworld. Morrighan is a Goddess of magic and sorcery and is sometimes shown as ancient and withered or conversely as preternaturally beautiful. Morrighan is also the Goddess of Sovereignty and in many myths She approaches a would-be King or Hero in her aged form, demanding sexual favors. When the Hero makes love to the aged woman, She transforms into a beauty in his arms and prophesies his rise to Kingship. Morrighan has different consorts in different areas, including both the Dagda and Mannanan Mac Llyr -both Gods of the Otherworld. Morrighan figures in the myth of King Arthur as Arthur’s magical half sister Who is sometimes a friend and sometimes an antagonist, but Who in many versions ultimately conveys Arthur to the magical realm of Avallon (the Otherworld).

TLACOLTEUTL -The name Tlacolteutl means “Refuse Eater” because this Aztec Crone Goddess had as one of Her chief characteristics the quality of consuming outmoded forms and transmuting them. At the end of their life each Aztec could make a confession to Tlacolteutl, Who would cleanse their soul of any wrongdoing which they related, allowing them to enter the Otherworld without regret. Goddess of magic and sorcery Tlacolteutl was sometimes portrayed riding naked on a broomstick and wearing a horned headdress, revealing a similarity of archetypes with European Witchcraft. As a Goddess of Death Tlacolteutl is sometimes portrayed as an old woman, but She also has aspects as Maiden and Mother Goddess and so is sometimes portrayed as a seductive beauty. The most famous image of Tlacolteutl shows Her in the act of giving birth.