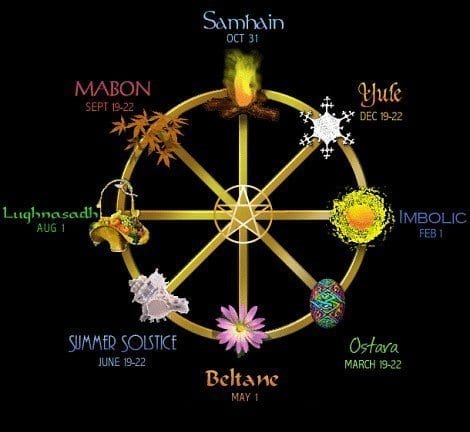 This story was originally written for children, but I have also found it a useful aid in describing the Sabbats to adult students.

Yule
The Lady was filled with sorrow. So greatly did she mourn her Lord, that the whole Earth was covered in darkness. All the people mourned with her, but no one could console her.

In the depth of her sorrow, in the great darkness, she felt something stir within her. Knowing that the stirring would become pain and the pains would bring birth, she secluded herself.

After many hours, the Lady came forth. She bore, in her arms, the child of promise. With his first cry, the sun rose over the distant mountains.

The people were filled with joy, and came to attend the Lady and the sun child.

Imbolc
The Lady rested from her labor. As she slept, the animals came into milk in her honor.

The women of the land knew of the Lady’s need for rest, and so they gathered around her that no one would disturb her. They lit candles in their vigil and chanted soothing melodies. So great was their love and devotion to the Lady that it burned pure, and all the Earth was purified.

The Lady slept and slept, but would not awaken. No one could figure out why she would not wake from her sleep. So, everyone decided to bring gifts to the Lady, in hopes that she would waken from her slumber. They brought cattle and sheep, and plants and food. But nothing worked.

“Well,” they said to one another, “we must have a very special gift to wake up the Lady.” So, they thought and thought, but they could think of nothing.

The rabbit heard what the people had said, and he had an idea. He really wanted to please the Lady. So he tried hard, really hardAnd he did it! He laid eggs! They were beautiful eggs, of every color of the rainbow. “They are so special,” he thought, “this will surely awaken the Lady from her slumber.”

So the rabbit went to the Lady and brought his special eggs with him. Suddenly, she awoke! The flowers bloomed and the birds sang. It was Spring!

Beltane
The young Lord was out roaming the Earth, playing and frolicking in the woods, when he turned and faced the Lady. When the two saw each other, they instantly fell in love. So, they decided to marry.

They planned a great wedding feast. All the people across the land prepared for the wedding with much joy and anticipation.

When the wedding day came, the people brought thousands and thousands of flowers. They decorated each other and their homes with the flowers. They decorated trees with brightly colored ribbons, and they gave each other baskets of flowers and ribbons in celebration of the Sacred Marriage. They were filled with joy, and danced around may poles and rode in hobby-horse races.

Even the sun was blessed, and it shined its brightest ever. All the people stayed out, feasting and celebrating in the noon sun. The children threw water in the air and danced in the fields. And some say even the fairies were seen dancing that day.

In this time of great joy, the Goddess conceived her child in love.

Lammas
Soon, the first harvest was celebrated. The Lord and Lady were so filled with joy at the completion of the first harvest, that they held a great festival. All the people came to the festival. They brought breads and fruits and vegetables. They celebrated with contests that tested their skills, and those with talent displayed their personal works and wares.

Mabon
At the height of the festival, the Lady brought out a great loaf of bread that was in the shape of a man. The Lord blessed the bread with his own energy, knowing that to do so would bring certain death. He knew that in order to live again, he must first die. So, he willingly gave his energy, that the grain would rise again and his people would live.

Samhain
The Lord crossed-over to the Summerland. He presided there as king, and gave the dead rest that they might be refreshed when it came time to be reborn into the land of the living.

The Lady, in her sorrow, called upon her Lord. He answered her from beyond the veil, and caused a door to appear. Through this door, the beloved dead and the living could communicate.

The people came and brought food and sacred apples. They laid their gifts before the door, asking the blessings of their ancestors.

The ancestors came, bringing peace and communion. Many brought visions of what might be in the coming year.